Since 2011, Medan, the capital of North Sumatra, has been jazzin’ much stronger than ever by having its own annual jazz fest. It might come as a surprise for some, realizing that Medan has been known as a rock city – not to mention the variety of traditional musics from tribes living in it -, but thanks to Berklee College of Music alumnus, Erucakra Mahameru and his WEM (Waspada EMusic), something that was started from his simple dream or wish. The main idea was to provide jazz event in the form of festival, but with specific and unique shape which embraces the local wisdom. Along with the committee, he persisted that it has to be different than the jazz festivals elsewhere.

Easy? No. But look. While many annual jazz festivals fail to keep their existance, this festival has been showing a strong, enduring power. Year after year we see them coming with unique batch of artists. They have gone international, but amazingly still accomodate the local ethnicity. Before we forget, the name of this fest is NORTH SUMATRA JAZZ FESTIVAL.

Here is the big news. After successfully held the fest for 7 times, WEM with the theme TOUR DE JAZZ will make not just one but two programs in this October. One is the 8th NORTH SUMATRA JAZZ FESTIVAL (NSJF) – Medan City on October 21st, 2018 taking place at the official venue, Grand Ballroom JW Marriott Medan, and the other one is the SAMOSIR JAZZ SEASONS (SJS) . This program brings jazz to meet the heavenly Samosir, the world’s famous super volcano geo park island located in te Lake Toba surrounding. The venue is situated at Dainang Pangururan Samosir Hotel, ready to run on October 27th, 2018.

Let’s begin with North Sumatra Jazz Festival. This 8th edition features the innovative young female jazz singer, the daughter of living jazz legend Indra Lesmana, EVA CELIA. We have seen her amazing talent even when she was still in USA, and when she came back home to Jakarta, her talent became even clearer. Not only she achieves huge success in music, she’s also famous as an actress. She will bring her new generation jazz dimension to Medan through this fest. Supporting Eva are Vicky Geovaldy, Aldhan Prasetya, Agung Munthe and Demas Narawangsa.

The founder of this fest who is also an established musician/guitarist, composer, producer and world acclaimed inventor, also an official WEM USA ASCAP Neo Progressive Jazz Artist/Band ERUCAKRA MAHAMERU &C MAN is in charge again. This time the band will present a colossal concert called RISE OF THE KINGDOM – SRIWIJAYA KRONOLOGI. In this concert Erucakra and his C Man team consisting of Rusfian Karim, Radhian Syuhada, Heri Syahputra and Brian Harefa is going to introduce the collaboration – adaptation of Jazz Onang-Onang. This is something surely not to be missed!

To make it even more interesting, Erucakra Mahameru & C Man will collaborate with famous jazz soul/jazz from Jakarta, BONITA. As you may already know, Bonita became famous with her long-running band Bonita & the Hus Band, an acoustic pop/soul/jazz band that has strong character based on intense, fun and joy.

The winners of band audition Shenology Music and DeVote Singers and Band are just listed to perform in this 8th edition of NSJF.

Completing the lineup, NSJF is set to once again present NORTH SUMATRA JUNIOR JAZZ that introduces young musicians with shiny achievements such as performing at the Carnegie Hall in New York such as piano prodidy TOBY TAN KAI RONG (Singapore) and the Indonesian Idol Junior 2018 contestant: NIKITA from Medan. 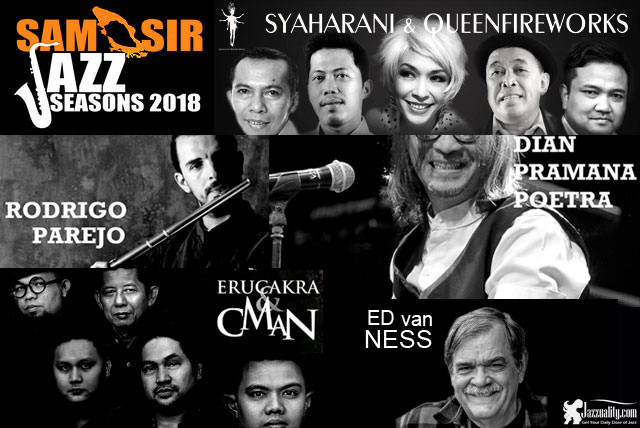 In cooperation with the District Government and Tourism of Samosir, WEM presents SAMOSIR JAZZ SEASIONS (SJS). This premiere edition will feature jazz artists with international reputation including the ERUCAKRA MAHAMERU & C MAN in collaboration with North Sea Jazz Festival’s Master flutist from Spain, RODRIGO PAREJO and BONITA, also the world maestro of contemporary Western classical orchestra, violinist, violist, conductor, writer, teacher from New Jersey who has been living in Indonesia for over 3 decades, ED VAN NESS. If last year van Ness launched his composition “Terry Riley ‘In C'” with Erucakra, it’s going to be interesting to see what they will bring this year. The top soul jazz band led by the warm, friendly and cheerful singer SYAHARANI & THE QUEENFIREWORKS (ESQI:EF) Also performing Medan-born, legendary jazz singer/songwriter who makes many everlasting hits since the 80’s, DIAN PRAMANA POETRA. Completing this year’s line up is DE PROFESSOR USU BAND.

This year, not only Medan will go jazzin’, the mystical, stunning island of Samosir will be too. If you are in Medan or North Sumatra, you are anywhere near or plan to visit the province this and next weekend, do join these two programs. For more info, ticketing and so on, log on to https://www.northsumatrajazzfestival.com and follow their instagram and facebook: @NorthSumatraJazzFestival and twitter: @SumatraJazz.