As Muslims around the world is now celebrating the Holy Month of Ramadhan, we once again set our this month’s edition of BRAGA JAZZ NIGHT to it just like the previous years. In this BRAGA JAZZ NIGHT #59 Special Ramadhan Edition we invited 3 bands to rise to the occassion, presenting their jazzy music not just to entertain the crowds but also fitting the concept to Ramadhan.

For this special theme, we got a band from another city in West Java, Majalaya and a band whose personnels live in both Majalaya and Bandung. Both of these bands were participating in last year’s Jazzphoria competition and made good impact. The other band marked its return on our stage after missing for almost 5 years. 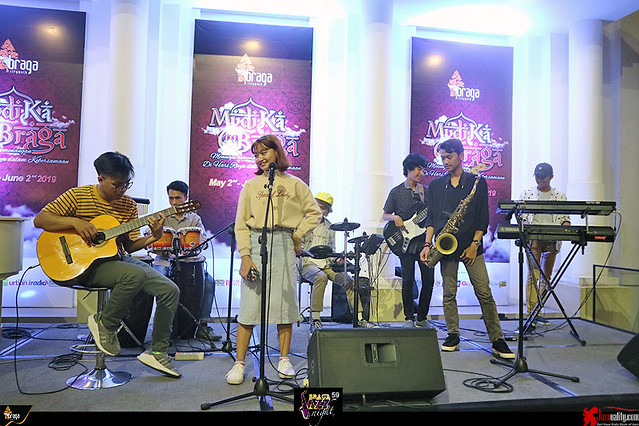 First to go was JAZZY TUNES. we met this band at the Jazzphoria competition. At that time they got the first number to appear and quickly grabbed our attention. What they play is a groovy pop jazz, the favorite style among youngsters and young at heart listeners.

More about Jazzy Tunes, it was formed around two years ago and got their first break at the competition. From there they sailed smoothly, reaching many events from high school fests, television to a big music festival where they shared the stage with many top stars including RAN, Yura, Kahitna, Marion Jola, Gugun Blues Shelter, The Overtunes among others.

We intended to invite them not long after the competition, unfortunately due to some reasons we couldn’t make it happen. Finally this time we were able to lock them in and got them for the first time on this stage, in complete formation. 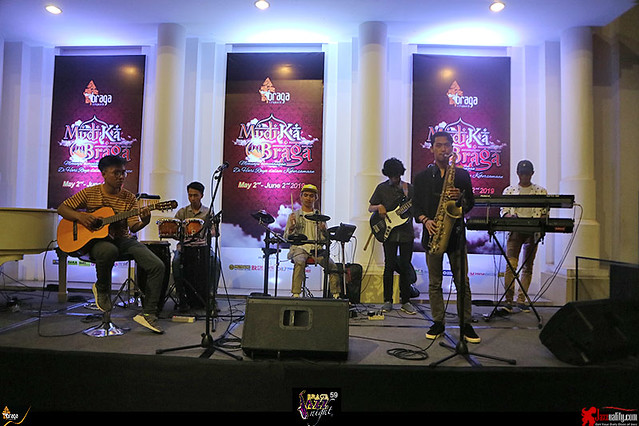 The Jazzy Tunes began with an instrumental number, “Mourning into Dancing” which quickly brought joy through the happy, mood-buster groove and melodies. Azrin joined the crowds after that and wowed us with her sweet, smooth vocal by singing a hit of Toronto’s Daniel Caesar with H.E.R that’s just won a Grammy some months ago, “Best Part”. While her voice fitted the song perfectly, the boys did very well in adding up some breath of jazz into this cool soulful RnB song. 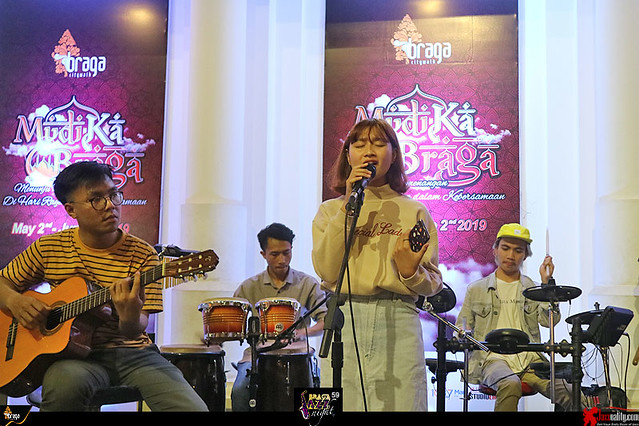 An evergreen “Tak Akan Ada Cinta Yang Lain” became their third choice. Yes, we have heard the jazzy version of this song quite many times, but Jazzy Tunes still gave us something fresh with their touch. This soon followed by a classic “Fly Me To The Moon” in still swingin’ but in much modern style.

For the last song the boys and young lady took a famous soundtrack “Laskar Pelangi” in a pop jazzy groove way, ending their debut on our stage with a party. Some of the audience sang along and clapped their hands, showing how much they loved Jazzy Tunes’ performance. 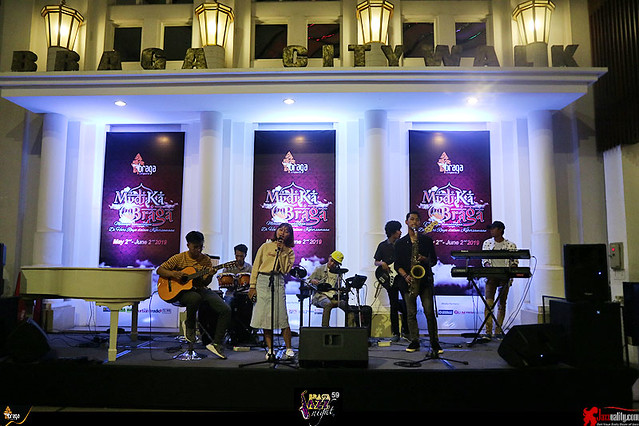 Jazzy Tunes delivered fresh groovy pop jazz the way we remember them from the competition. Clearly they had fun in their performance. They appeared cheerful and lively, making the audience able to feel everything they sent from the stage fully. Having personnels living in different cities must be tricky, since it would be difficult for them to find time to practice together. Not to mention each of them should have their own activity. But looking at their show, we can see that they don’t have it as an obstacle. They share chemistry and play solid together as a team as if they practice frequently on daily basis. Their next challenge is to keep the good work up and go higher. It might not be easy, but if they can do it for these past two years, they should be able to achieve even more than they have ever dreamt of. 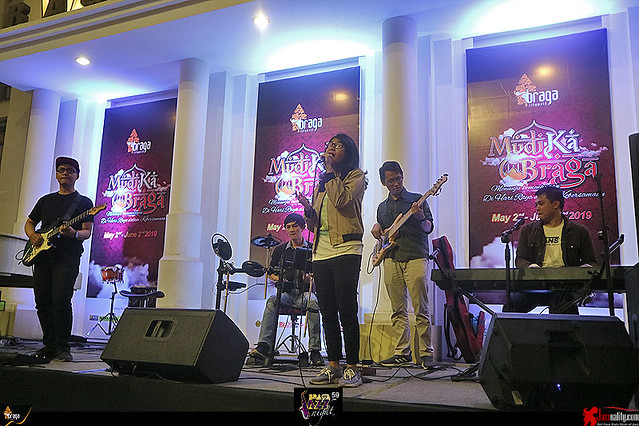 The second act was OWCINDFUL. The band was first named Dora the Explorer, but for not long because they soon changed the name to Owcindful. The keyboardist and band leader’s name is Nicodemus Horisson, also known as the keyboardist of Chakraborty. If you want to know where the name came from, taking the name of the keyboardist, Nico, spelled backwards, then spiced it up a bit.

This band was formed exactly on Valentine’s Day in an event at Trans Studio Mall. This band plays jazz-based funky disco and groovy pop fusion, a good, familiar musical elements that made them got many appearances around Bandung. That includes a performance in our previous event before this one, Terraz Jazz, at that time celebrating Indonesia’s Independence Day.

They were moving on good, all the way to producing a single titled “Kecewa”. Unfortunately later the band went on hiatus for a couple of years due to the personnels’ busy agendas. A couple of months ago we heard from Nico that the band was about to wake up from its long sleep. We directly asked him to bring the band to this event, and this edition marked the return of Owcindful: first time in Braga Jazz Night but the second appearance in our created event. 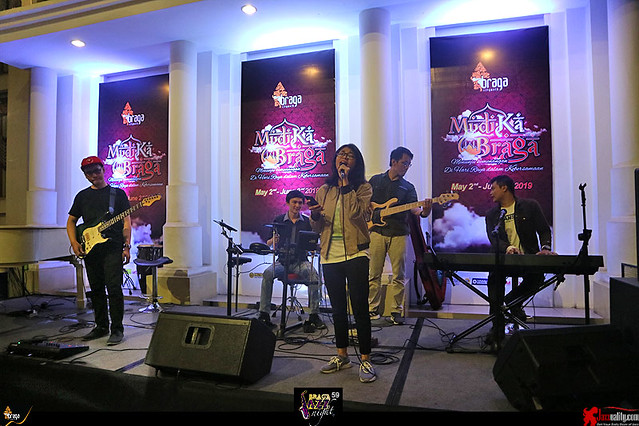 It was great to see that most of the original members are still in. Nicodemus Horisson (piano), Ariel Arliyanus (guitars), Jere Fernando (also of middle-sized ensemble KelasSore, bass) and Andre Joshua Yonatan (drums). Before they started, Nico told everyone that this was their first stage reunion after 3 or 4 years. We are proud and delighted that this band had their comeback with us.

Nico then told everyone that although this is a Ramadhan edition, he decided to bring his own theme. And that is ‘fixing the broken heart’, meaning that Owcindful would tell stories of someone trying to fix their brokenheart through series of songs. Starting with The Groove’s “Dahulu”, we directly encountered the sharp, on-point beat, whacking groove with jazzy touch and splashes of rock, something we still clearly remember from this band. Add those with a lovely vocal with smooth rapid vibe, they got everyone’s attention right away. 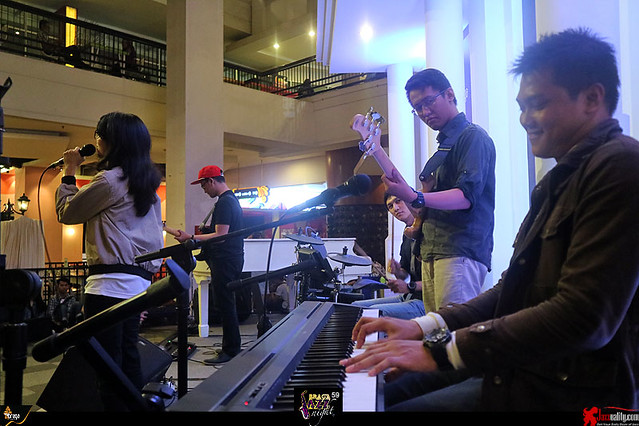 The story moved on to another chapter, Tulus’ “Ruang Sendiri”. Maria and the Owcindful boys delivered it effortlessly chilled, making it as if it’s their own song.

Owcindful then introduced their own song, written by Nico in 2014 titled “Kisah Hati.” “This song was made in 2014, but we never got the chance to launch it. So I think it’s okay to do it now”, he said. The song started only by Maria and Nico. Although they have just known each other, it’s great to see they share tight chemistry, resulting deep emotion in the first part of this song.

Not wanting to let the negative vibe over heartbreaking feeling, Owcindful gave a positive message with Utha Likumahuwa’s famous hit, “Esok Kan Masih Ada”, which means ‘there will still be tomorrow’ in English. The story ended up with a message to move on in love through Vina Panduwinata’s hit from 1984, “Dia”. 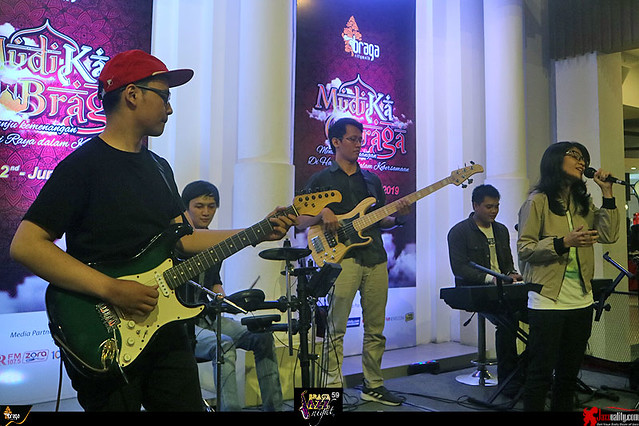 A really, really nice comeback was captured in this edition of Braga Jazz Night. We always know that this band intends to entertain its audience with jazz-oriented, easy-to-chew music. The delicate jazz piano playing, the smoothly provoking rocking guitar sound, the groovy bass working, the sharp drumming and sweet vocal are always the essence of this band. We still remember their performance 5 years ago at the Terraz Jazz, so it’s good to have it all back. We do hope Owcindful to keep running, because there’s always room for a band with such music concept to get more and more fans. If they keep their existance, we will definitely invite them again in the near future. Welcome back guys! Live long and prosperous. 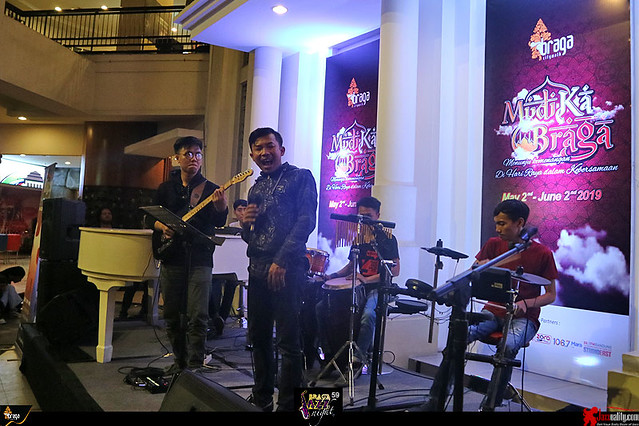 The final band is a band having their second appearance on this event after last year. Everyone in this band are coming from Majalaya and have been together for many years. It’s SAVASIKA.

Just like Jazzy Tunes, we got to know this band also from the Jazzphoria. From them we realized that there are many jazz-oriented bands in Majalaya, which for us shows that jazz is breathing in it. Not just exist, they are really good too. And this band can be a perfect example for that.

Although the band is built with young adults, this band actually is not new. They have been together for about 8 years. As you might have guess, it’s never easy to keep a band running for that long. And it’s not easy for them too. They have been gone through ups and downs. There are times when they paused the band, but in the end they got together and run again. They have been giving good fight against many obstacles which makes the band able to keep its existance until today.

Savasika don’t just do covers, because it has original songs too which you can find on Youtube. 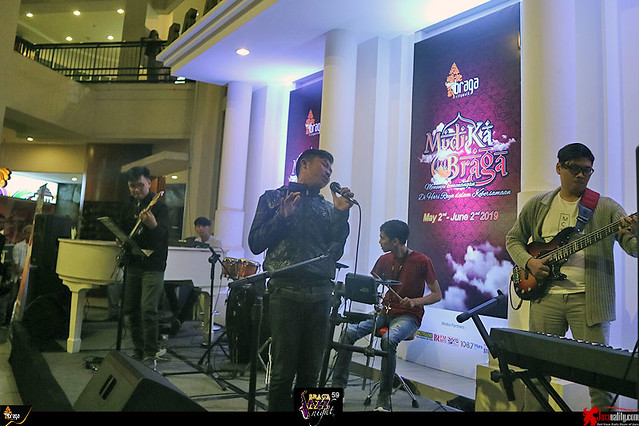 Savasika didn’t want to waste any time. They began with a bang, taking on Barry Likumahuwa Project (BLP)’s first hit “Mati Saja” The expressive and charismatic vocalist with cool falsetto voice Erfan was eye catchy on stage, and the blending between him and his fellas on the instruments were tight. That made an entertaining scene on stage. 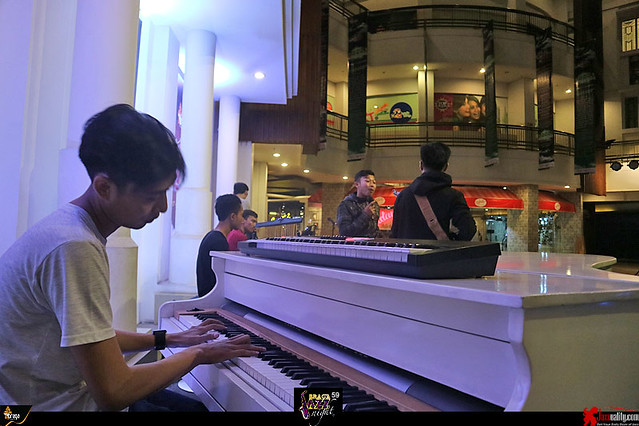 For the next song, suiting the theme of this edition SavaSika did a very fine cover of Once’s “Dealova”. Erfan is the kind of male vocalist with wide range, it’s no problem for him to go to the height like how Once does on this song.

For the third song they took Toto’s classic from 1978, “Georgy Porgy”, a nice attempt to keep the groove with a familiar song. And for the last song, SavaSika gave us their ‘winning’ song, Tania Maria’s golden hit from early 80’s, “Come With Me Now”. We say winning song because this was the song that wowed the judges at the Jazzphoria competition then announced them to be in the final. It might look like a simple song, but actually it’s not easy to sing due to the ‘spirit’ one has to have in singing it, and it becomes even more difficult when a man tries to do it. Not many male singers have this song in their repertoires, but Erfan and his compatriotes dare to take it and make something good out of it. The song served as a good climax that sealed this edition nicely. 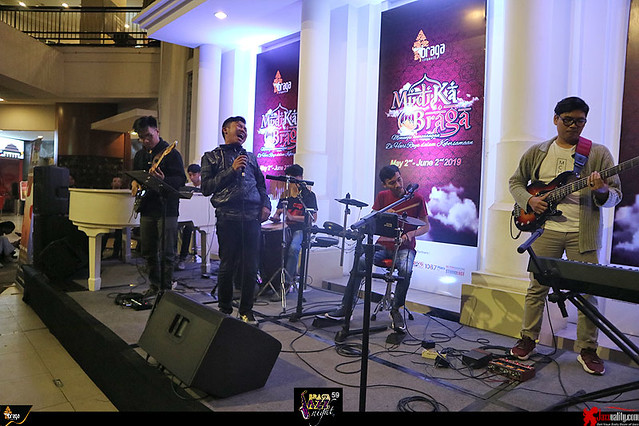 It is difficult for a band holding jazz as its core to have enough gigs, while certainly a band needs it in order to keep going. Therefore we are amazed with a band like Savasika who, despite of all the difficulties, manage to overcome all the obstacles and keep the band rolling. It was a solid performance. We are happy to hear that they are still getting more and more gigs here and there. We wish SavaSika all the best and look forward to have them again in later edition. 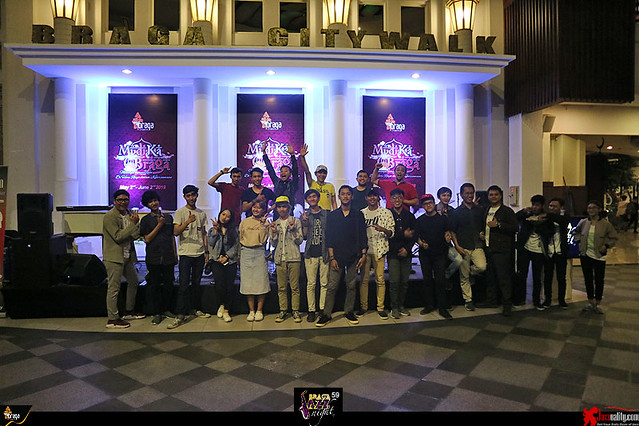 We are proud to see the talents who played for this edition. Not only they all gave their best shot in delivering variety of jazz but also in suiting the Ramadhan theme. We thank everyone who came and involved in any way. Still many days left to fast, we hope everything goes well for our Muslim friends and readers. May this holy month brings you lots and lots of blessings. Happy Ramadhan. 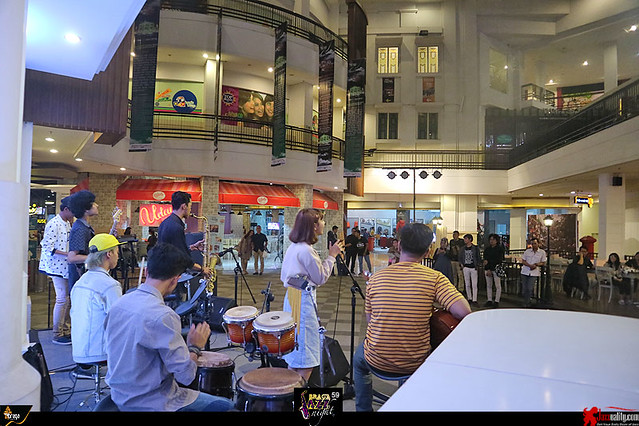