Since 2011, Medan city, the capital of North Sumatra has finally had its own jazz fest called North Sumatra Jazz Festival (NSJF). Born as the brainchild of Berklee College of Music alumnus, neo progressive jazz guitarist/composer and inventor Erucakra Mahameru, the North Sumatra Jazz Festival is set to create a good jazz event with strong character that embraces the local wisdom. We salute Erucakra and all the committe who have given tremendous effort to maintain this annual event. Not only it keeps running year after year, we have been watching them grow too. This festival has invited many living legends, superbands and masters from both national and international scene, but amazingly the festival always opens up the chance for the youngsters and newcomers to perform. Not just that, they have been including traditional musics from variety of tribes existed in North Sumatra to walk side by side with jazz.

This year, the North Sumatra Jazz Festival has reached the 8th edition. It was held a couple of days ago on October 21st, 2018 taking place at the official venue, Grand Ballroom JW Marriott Medan. Standing on the headlines are new sensation Eva Celia (daughter of Indra Lesmana and Sophia Latjuba), Bonita (daughter of Koes Hendratmo, famously known with her band Bonita & the Hus Band) and of course, Erucakra’s band, Erucakara Mahameru & C Man with a very interesting concept. 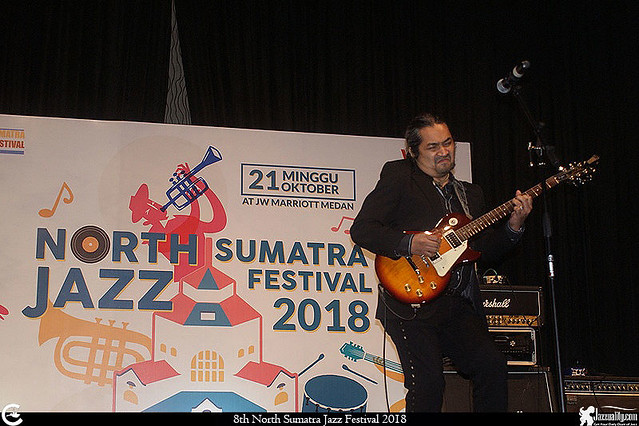 The 8th North Sumatra Jazz Festival 2018 kicked off with the opening performance from the two band audition winners, Shenology Music and DeVote Singers & Band. Then, presenting the North Sumatra Junior Jazz, some young musicians with great talents and achievements let us see the progress of jazz development in this city.

The piano prodigy Toby Tan Kai Rong from Singapore then comes up on stage. This little boy is still 9 year-old, but he has bagged so many achievements. He won the Singapore Junior Original Concert two years in a row in 2015 and 2016 with his original compositions, Gold in the Asia Arts Festival and 1st Place at the American Protégé International Music Talent Spring Competition 2017. He has his debut performance at the New York Carnegie Hall in December 2017.

The shiny list continues on with 1st Prize and Category Winner for the ‘eMuse’ Online Music Competition 2017, 1st Prize (100/100 Absolute Prize) and Exceptional Young Musician Award for the Salzburg Grand Prize Virtuoso, 2nd Prize for the Bradshaw and Buono International Competition and 3rd in the Open Category 2016 Singapore Asia Youth Competition. In 2017, he also made his debut performance in Gyzi Megaron Festival in Santorini, Greece and competed at the Japan Piara Piano Competition and won an Apollo Award. All before he even reaches two digits of age. 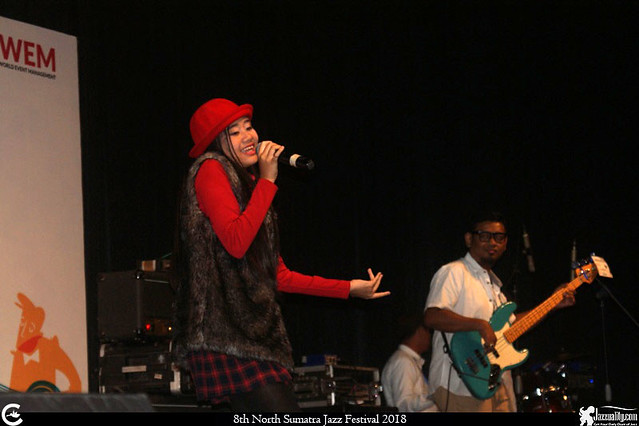 The show carried on with the North Sumatra/Medan jazz girl wonder; Nikita Mawarni, the finalist of Indonesian Idol Junior 2018 that swept away the audience’s attention. Like the act 1 of the musical concerto, This 11 year old girl really can jazz up the NSJF stage and wrapped that first act with her splendid performance and also a cute stage act.

The founder of NSJF Erucakra Mahameru doesn’t only stand as the highlight of every edition with his band Erucakra Mahameru & C’Man Band, but he knows how to surprise everyone by creating inventive ways in exploring jazz. This time, announcing their status as the official WEM USA ASCAP Neo Progressive Jazz Artist/Band, Erucakra with C Man Band – consisting of Rusfian Karim, Radhian Syuhada, Heri Syahputra dan the smooth sax sensation Brian Harefa collaborate with Bonita, a soul jazz singer/songwriter who found success with her band Bonita & the Hus Band other than pursuing her solo career. 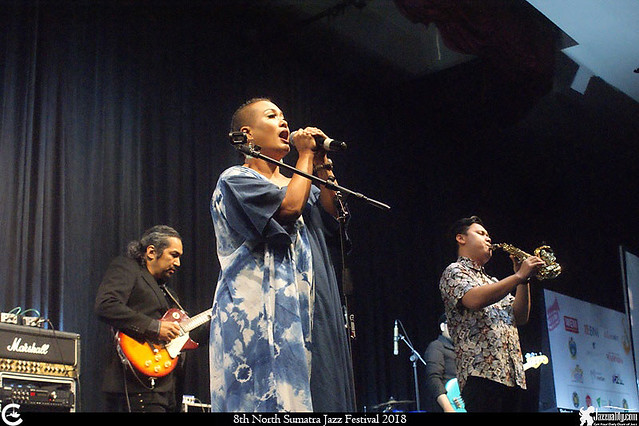 To open up their collaborate performance, Bonita and Erucakra sang national song “Tanah Airku” composed by the legendary Ibu Sud like an anthem. Bonita then brought her first single before jazzin’ the stage with Titiek Puspa’s classic, “Bimbi” – the famous song about a girl struggling with Jakarta’s nightlife. 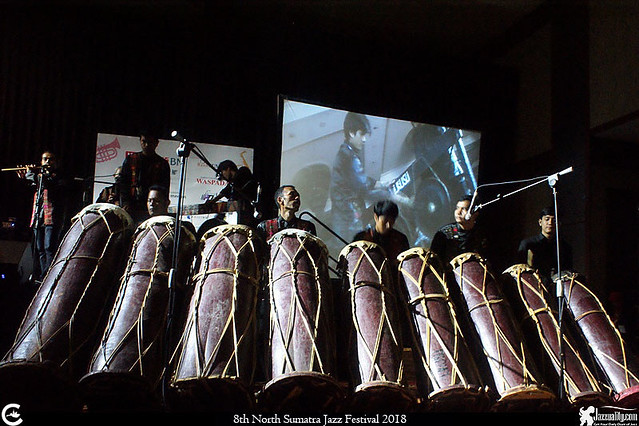 The most inventive part of this year’s NSJF then rolled, still by Erucakra & C Man. After some of their previous compositions, they went on blending jazz with North Sumatra music ethnicity they called as Jazz Onang-Onang. With the special touch of Batak ethnic music consisting Sulim/Suling and Mandailing Gondang called Gordang Sambilan, Erucakra presenting a colossal numbers titled “Rise of the Kingdom – Sriwijaya Kronologi”. Majestic, ground-breaking in every way, this ingenious exploration of jazz surely cannot be found in any other jazz festivals. Truly a masterpiece!

The intermission of the show then gave the stage to the fundrising for the Palu, Sigi and Donggala which was hit by a series of large earthquakes (the largest being 7.5) and a 5-6 m tsunami, also Mandailing Natal by Waspada and Dompet Dhuafa, then welcome speech by North Sumatra vice Governor Musa Rajekshah. 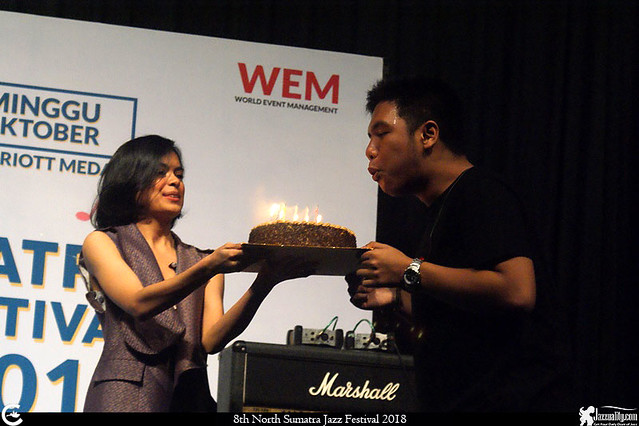 After all done, the time for Eva Celia, the most awaited performers has finally came. Also known as a famous Indonesian actor, Eva brought the musical – entertainment legacy from his father, the legendary Indra Lesmana and mother – singer/actrees Sophia Latjuba. Eva started sailing with two songs from her debut album “And So it Begins” (2016).

Performing with his band consisting of Vicky Geovaldi, Aldhan Prasetya, Wahyu Agung Munthe and Demas Narawangsa, Eva took time to celebrate Agung’s birthday by giving him a birthday cake on the stage. 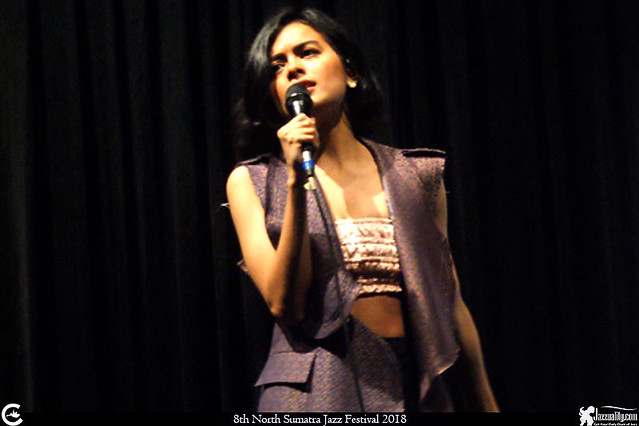 After greeting the audience, Eva brought Dewa 19’s hit “Aku Disini Untukmu” on stage, followed by the rendition of two of her mom’s old hit singles – “Diam” (composed by Indra Lesmana & Mathias Muchus) and Sophie-Indra’s duet ballad “Tiada Kata”. Closing her performance, Eva back to the Dewa’s classic rock ballad “Takkan Ada Cinta yang Lain” and “Reason”, her first single from ‘And So it Begins’. 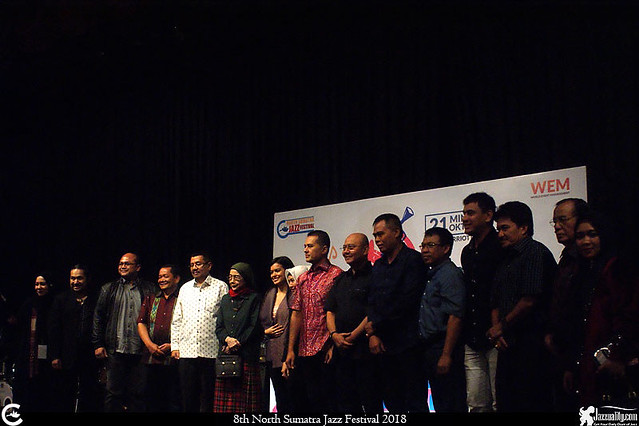 Now that’s a wrap for another great edition of North Sumatra Jazz Festival. Prepare yourself jazzin’ for more at the first edition of the joint program, Samosir Jazz Seasons. With surprisingly stellar performers such as Dian Pramana Poetra, Syaharani and the QueenFireworks (ESQI:EF), Ed van Ness, Rodrigo Parejo, the event hopefully will continue annually in the center of the heavenly Samosir, Lake Toba – at the Dainang Pangururan Samosir Hotel on October 27th 2018. Kudos to WEM, may both of events continue spreading the love of jazz all over North Sumatra. See you again next year!