Christmas and jazz. Think of it. They are so compatible to each other. Try to count how many ‘non-jazz’ musicians/singers suddenly turn themselves to jazzy moods when they are releasing Christmas albums, you will loose count. Think of how many swingin’ and boppin’ Christmas carols you can find throughout the years. You will loose count even more. With or without snow, with or without Santa Claus, Christmas and jazz will always work to bring the message of peace, grace and love from God.

So, as usual, we dedicated our on-going jazz community event, the Braga Jazz Night to celebrate Christmas. In this Braga Jazz Night #66 we invited several bands or groups that we believed would make a merry, jazzy celebration.

It was supposed to be three groups like before, but unfortunately one band failed to perform, it was the drum-piano real life couple, Caberawid. The reason of that is because the pianist Widiyanto Sutanto was down with high fever just a day before the event. We still got the young key-wiz Jeremy Hutomo with his trio and the indie pop-rock band Teman Musik. With only two left and show must go on, we got to make some arrangement with the available bands. The situation got worse because we found out that the keyboard was broken. It could give us really big trouble, but then the magic of Christmas happened! Our co-host Erick Gabe confirmed that he would come along with a keyboard. Unbelivable, unreal, but miracle did happen, thank God for that. 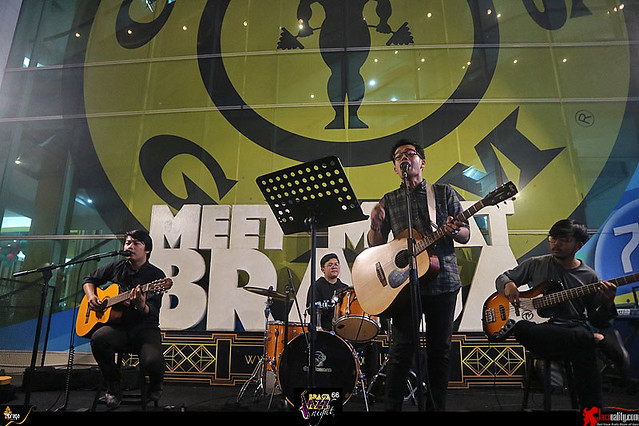 The first show is a band who takes ‘friendship’ as the most important thing in life. It’s TEMAN MUSIK.

Teman Musik has been existing for no less than 5 years, built to compete at the inter-school music competition back in 2014. This band has 4 members. They are Nadha Pratama (drum), Yoga Andika (guitar), Meiadi P Aritonang (vocal) and Adi Setiadi (bass). Their music source is kind of interesting, because the band draws influences of vastvariety of bands/singers, from Coldplay, Efek Rumah Kaca, Payung Teduh, The Beatles, Nirvana, Bon Jovi, Ed Sheeran, The Trees and the Wild to Michael Buble among others.

If you want to know where their name came from, it’s related to the word ‘friendship’ as we have mentioned earlier. They carry the motto: “Looking for friend from friends, to be friends with.” Meaning, other than playing music, they are always looking for friends, and hope that their music would be friends with the listeners’ ears.

This band has the music that is current and favored by the youngsters. It’s the pop-based indie music with some splashes of rock and other essences sprinkled above it. That became evident right from the start when they gave “Hidup Untuk Siapa”, their own original song. This simpe, mid-tempo song was well crafted. It could easily become a big hit. They continued on with another original, “Rupa Lupa Rasa”. 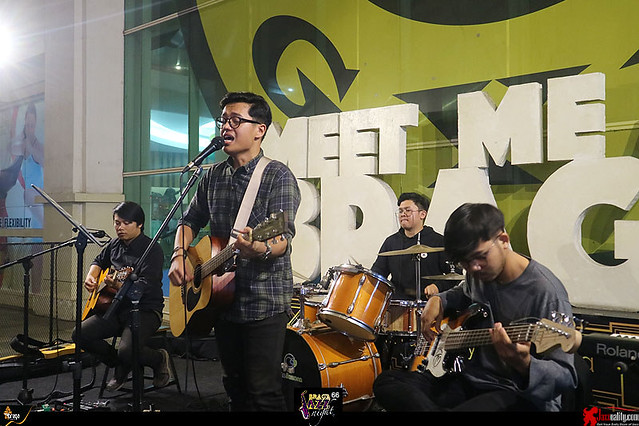 Meiadi is the vocalist of the band, but the rest of the band actually took the vocal parts too along with him. Meiadi told the audience that for this event they were going to bring all original songs. And as it’s special for them, for the very first time Teman Musik would sing all songs which will be included in their upcoming album, scheduled to release in early 2020. We really appreciate it.

“Kebiri Kepala” and “Hanyut Hampir” came right after. Again, the thick indie music spirit filled the air. This band already has some fans, as they sang along almost in every part of each song. Many of them recorded the performance using their smart phones, many passers-by stopped and watched the band, for us that’s a clear sign of how good the reception is by public.

Their single-carrier “Tenanglah” came next as the peak. This song probably is the strongest one, at least in our opinion. It has catchy melody, good lyrics and strong emotion. We won’t be surprised if this song becomes a big hit soon, or even being used as a soundtrack in the movie. For the last presentation Teman Musik sang “Tempat Tuk Dikenang.” Again, we saw their fans and friends sang along. Big applause in the end were given by the crowds. 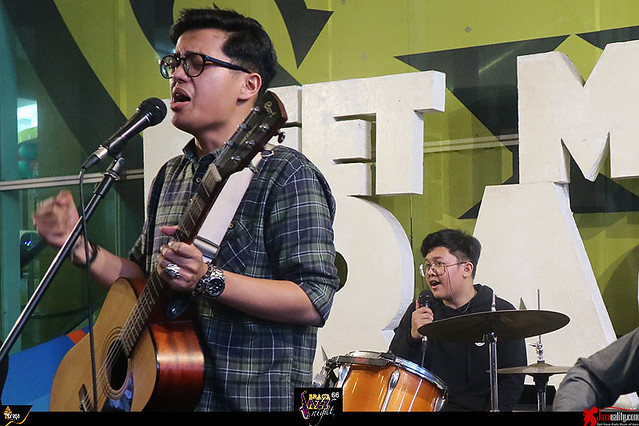 Extending friendship to everyone is a good spirit, something that we actually have to do as a human. Music is, and can be a perfect way to do it. The band’s surely realized it as they do exactly that. Their pop-based indie music is really ear-friendly and ear-catchy, their fun appearance makes everyone feel familiar with them, even to those who just met them for the very first time. A band with wide varieties of musical background like this would have big chance to have success in our music industry. The fact that they are good would give them better chance to achieve it. 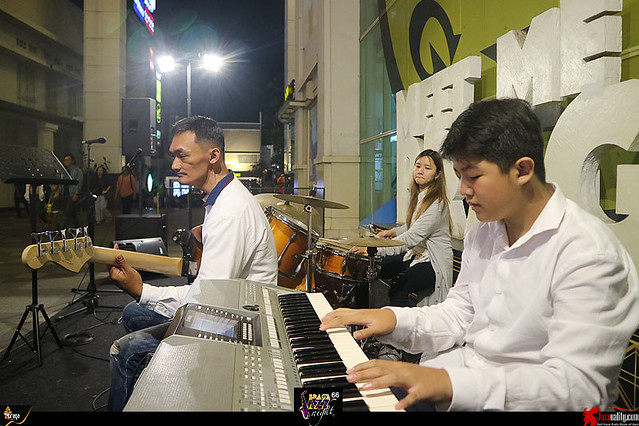 Then it’s time to see the awe-inspiring young boy. He’s still in his very early teen but he’s an awe-inspiring jazz pianist, something that he has shown us 5 years ago at the age of 7. This boy has been really into jazz, he’s able to play complex jazz arrangements effortlessly, bringing each song in his own way and making them like his own. How a boy that age could explore the compexity of jazz? We can’t come up with any logical explanation, but religiously speaking, he can be one of the solid proofs that miracle does exist. He is JEREMY HUTOMO.

Jeremy started learning piano at the age of 7, but at that time he didn’t do it too seriously. Instead, he was more into playing chess which made him representing Bandung in under the age of 8 Chess Championship. He got his first encounter with jazz when he turned 8, learning from Yahya Salam for several months. He digged blues and classical for a while before he decided to get deep with jazz seriously.

We met him for the first time at our previous event, Terraz Jazz where he came and surprised us with his amazing way of playing “Billie’s Bounce.” At that time he was only 7 years old. He then appeared as a trio in this event, and wowed the audience when he gave a solo jazz piano at our other previous event, Bumi Sangkuriang Jazz Night.

We have been wanting him to play again for quite some times, but we didn’t want to disturb his formal study. When it comes to holiday, we thought we could bring him in, and yes, he accepted our invitation.

For this time he played also in the format of three. Other than Jeremy himself on keyboard, he was empowered by his father Hasto Utomo on bass and Marissa Wiguna on drums. 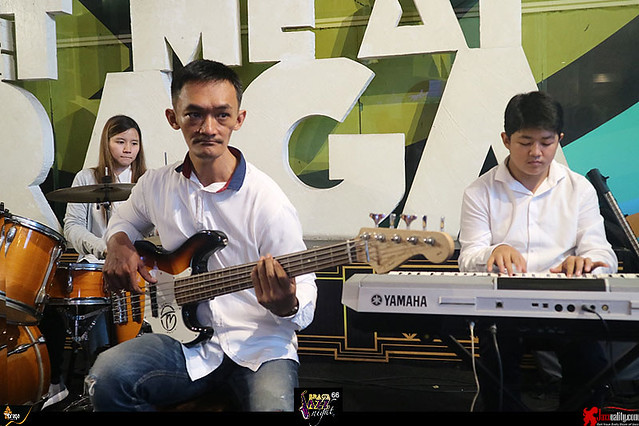 “Paradox” became a really strong intro that directly introduced the boy and all of his jazz magic to the audience. He caught many people by surprise through a wicked piano playing, while his father Hasto and Marissa served him very well.

Then they went on with Chick Corea’s “Spain”. This choice enabled us to see how great he is as a jazz pianist and how good they are as a unit. Spain is not an easy song to play. It’s really challenging because the song requires speed, precision and chemistry especially in doing the tuttis. What amaze us is that Marissa didn’t even have the time to rehearse beforehand, yet they played sharp and neat. Erick Gabe joined the party near the end to add vocal. He didn’t just sing the way Al Jarreau’s version, but he also added mouth trumpet, trombone and scatting.

“Stolen Moment” again reflected this kid’s awesomeness, followed by the song that Jeremy loves the most, also the one who caught us by surprise when we met him for the very first time at the age of 7, “Billie’s Bounce.” He really owned this song as he has played it for many years. It was great back then, it’s even more improved now. 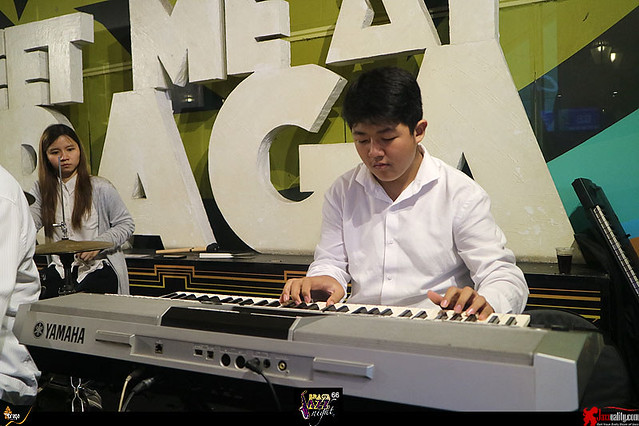 Then he led his dad and Marissa to play Christmas carols and praise. Starting with “Gloria in Exelcis Deo”, Jeremy led his trio to criss-crossing between modern swing and fusion. Then it became even intense when he gave us his own version of “Hark! The Herald Angels Sing”, which is really, really wicked. Lots of tuttis, twisted and progressive. A 13 year-old boy making this kind of arrangement, for us that’s an absolute stunner. Wow! 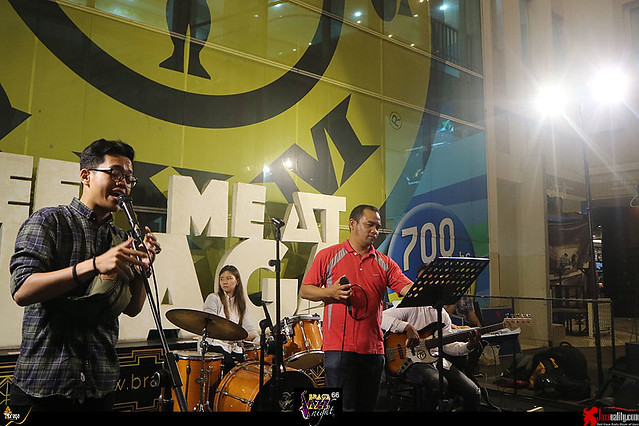 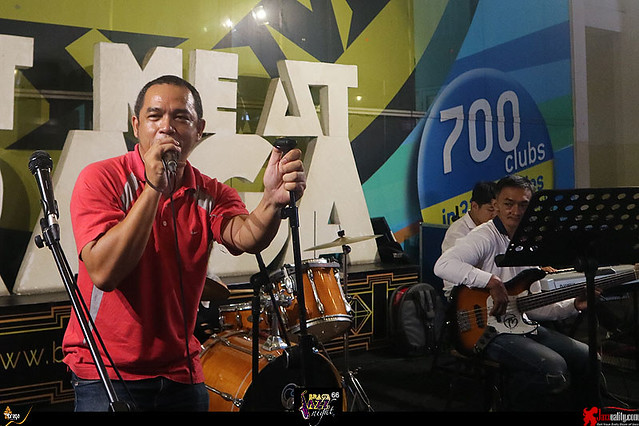 Erick Gabe came back to the stage and opened up the jam session. Along with Jeremy Hutomo Trio he improvised under swinging 12 bar blues. Then as this edition was made for Christmas, he sang “Gloria in Exelcis Deo” in Indonesian language. Meiadi from Teman Musik joined him in front and together they all had lots of fun. The photo session sealed this month’s as edition as well as the whole 2019 program.

We have showcased many amazing kids with strong jazz soul in our event. Among those amazingly gifted kids, Jeremy has to be one of the most incredible ones. He’s the kind of calm type of player, but his jazz style is pure and clean, full of spontaneity, as if he’s been doing it double or even triple his age. Not to mention his arranging style which is far above his age too. Having reliable assists from his dad Hasto and the girl with rich beating skill Marissa enabled him to explore the world of jazz as wide and free as how he wanted to be. We’re so very proud of you kiddo! Never stop using that blessing you got in music to bless others.

It feels like yesterday when we just marched into the new year of 2019. But hey, here we are at the end of the line. We feel blessed to be able to showcase no less than 36 acts throughout 2019, dominated by the young guns. Presenting the rainbox-like yet united colors of jazz always stands as one of our top priorities, and this year we’re able to expand the horizon as wide as possible. For us, 2019 has been a good year. We will be back again in January 2020 and look forward to keep going throughout the year.

We thank all performers for this edition, all supporters, partners, friends and also the audience, for without you this event wouldn’t go anywhere. Lastly, to our readers who celebrate, we wish you a Merry Jazzy Christmas and Happy Swingin’ New Year! Let peace, love and happiness filling up your heart. Enjoy the season with your loved ones, may you all be blessed always. See you again soon in 2020! 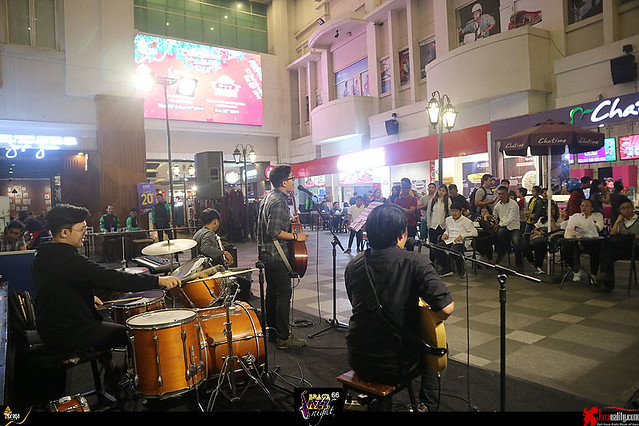